On 15 October, 1917, an amazing woman was born.  Marion Donovan an American woman who has been credited with creating the first modern cloth nappy or at least the closest thing to it, but she certainly started the road to the nappies we have today.  So, let’s take a little walk through the history of nappies.

In the early early days, babies were wrapped in animal skins, moss or in the tropics nothing, until along came cloth nappies.  These started as large squares of cotton/linen, which were folded over many times and wrapped on to the baby, then held in place with safety pins.  This type of nappy, which is still available now, is commonly referred to as a flat nappy or a traditional nappy. Nappies like these were used for many years.

However, in World War 2 the increase of working mothers made the labour intensive washing and boiling of large nappy squares undesirable.  It was around this time that nappy washing services came about.

Then in 1946, Marion Donovan, a housewife sick of changing wet bed linen, wet nappies, wet clothing and dealing with nappy rash due to the rubber pants available at the time, had a light bulb moment while in the shower.  She cut a square out of her nylon shower curtain and created the first waterproof covering for cloth nappies.

She then started producing the “Boater”, a reusable nappy cover made from surplus nylon parachute cloth and using snaps, rather than nasty safety pins.  When Mrs. Donovan’s Boaters made their debut at New York’s Saks Fifth Avenue in 1949 there were an instant success.  Donovan was granted patent in 1951 and sold the patent for over $1 million (close to $10 million in today’s money).

To continue a bit of history, in 1950 the prefold nappy was invented by a nappy service company, as well as the first fitted nappy.  In the 1960s, the disposable nappy became popular and cloth nappies fell out of fashion until the late 1980s when there were growing concerns of the environmental effects of disposable nappies and cloth nappies started to make a come back and changes in design for modern living.

In 1987, Bummis invented the modern nappy cover to go over flats and prefolds using Velcro and is very similar to a Real Nappies Snug Wrap cover and prefold, this was also the year that Snappis were invented, so the days of safety pins were long gone. In the 1990s, cloth nappies started to become quite popular and some were getting so popular they were being sold at $200 a nappy.  1999 saw the development of the one-sized nappy and in 2000 PUL was brought into the market.  In 2002 and 2003 there was a lot of competition from larger nappy companies who began to threaten smaller ones with legal action and accusations of pattern or patent infringement.  But in 2004 and 2005 the growth in the cloth nappy community saw many WAHM (Working At Home Mothers) sewing, and retail businesses starting up.

2010 saw an outrage from parents using disposable nappies reporting burns and rashes.  And more recently there has been even more bad publicity around disposable nappies for the environment as well as causing health issues for babies, which has increased the popularity of cloth nappies.  A quick google search and some rather nasty images will pop up.

Now cloth nappies are a popular option for many parents particularly as concerns continue to grow around the health and safety as well as environmental factors related to disposable nappies.  Additionally, cloth nappies of today are far easier to use and manage that those of pre-WWII.

So, I think we can all thank the inventiveness, determination and spirit of the woman who started the pathway to an easier nappy system.  It all started in the sewing room or on the kitchen table of Mrs Marion Donovan, a determined lady who wasn't put off by companies of the time telling her that her ideas was no good.  She knew she was on to something and she went for it - what a woman. 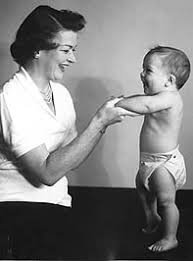 "I went to all the big names that you can think of, and they said: ‘We don’t need it. No woman has asked us for that. We don't need it at all [...] They’re very happy; they buy all of our baby pants, and we have a very good sale.’ So, I went into manufacturing myself." - Marion Donovan on inventing The Boater.